Cardiologists who perform or interpret Nuclear Stress Tests may have a new prognostic indicator.

When a patient’s heart rate increases less than normal in response to Lexiscan (Regadenoson), they may be at increased risk of cardiac events & mortality.

This is most likely due to cardiac autonomic dysfunction.

44 – 66% Of Labs* Have IAC Reporting Deficiencies.
Can You Handle An Audit?

*According to a Study in the Journal of Nuclear Cardiology

Blunted heart rate response (HRR) to exercise is widely known to be a cause for concern.

If not caused by medication, this blunted HRR can be a predictor of poor outcomes, independent of myocardial perfusion imaging results.

There is an expanding body of evidence that heart rate reponse to vasodilators is just as important as HRR to exercise.

1,156 patients underwent regadenoson MPI & were followed over the next 22 months.

The patient’s heart rate response (HRR) to regadenoson was found to be an independent predictor of death rate during the follow up period.

They divided the patients into quartiles based on their HRR:

In this study, Aljaroudi et al looked at the prognostic value of HRR to regadenoson in patients with end-stage renal disease (ESRD) by prognostically following patients enrolled in the ASSUAGE and ASSUAGE-CKD trials.

Blunted HRR was a strong and independent predictor of death & cardiovascular events.

Andrikopoulou & Hage suggested that there is now sufficient data to support the use of blunted HRR to regadenoson as an independent variable when risk stratifying patients with normal perfusion results.

Heart rate (& blood pressure) usually goes up during vasodilator stress, whether it be dipyridamole, adenosine or regadenson.

There are 2 possible reasons that heart rate typically increases:

It appears that the second explanation is most likely.

Here’s how they summed it up:

“To fully appreciate the value of incorporating the HRR in clinical practice, we need to take a step back and look at the determinants of HRR. The increase of heart rate during vasodilator MPI has been shown to be mediated via direct sympathetic stimulation by adenosine A2A receptors.21 Therefore, HRR reflects the status of the autonomic nervous system and is independent of systemic vasodilation. Indeed, in both animals and humans, the intensity of the HRR has been shown to be dissociated from the systemic blood pressure response.22

Contents of This Article:

IAC Nuclear/PET reporting standards got even stricter on Feb 1st. Outdated reporting protocols put your accreditation (and revenue) at risk.

Can Your Cardiology Practice Handle An IAC Audit or Random Site Visit?

Is your cardiology practice ready for an audit or site visit?

Are Your Reports Compliant with the New IAC Standards?

Get a Live Demo 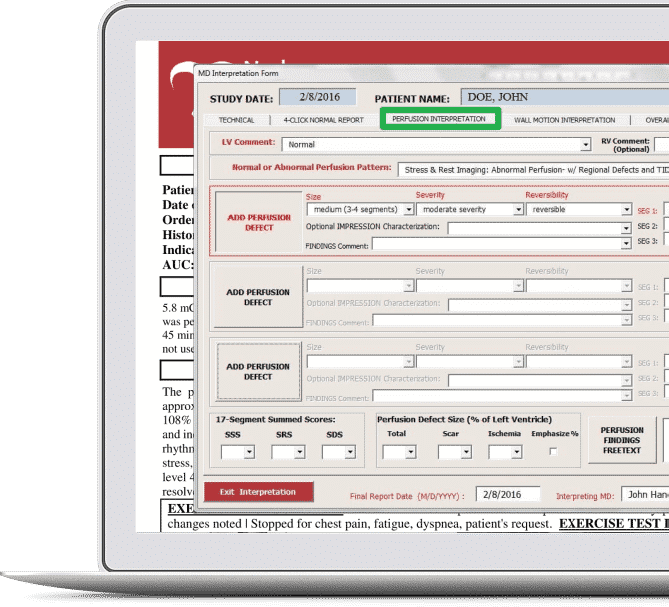 We'll also send it via email

We'll also send it via email

System Requirement: a Windows PC with Word 2010 or newer

We'll also send a copy to your email.

System Requirement: a Windows PC with Word 2010 or newer